In the week the Pig was released 4000, yep four thousand, books were released into the UK general market- 800 on the Thursday alone. That's a lot of noise. The fact that we've already got one review is amazing in the light of that but it is a little frustrating waiting... So in the meantime I'm posting the next in the recipe series - this is for the Yam and Praline Cheesecake that... 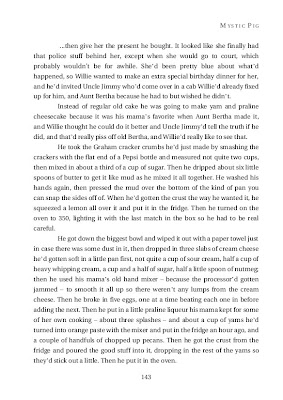 ...Willie makes for his mum's birthday bash. I could tell you that I made it and it was splendiforous but I suspect the first part of the claim would be stretching the suspension of disbelief beyond breaking point... I'm free the evenings of this week tho...
Posted by Oleanderman at 10:09 No comments:

"this is writing that manages to be both earthy and transcendent."

NOT a new novel as such but a rescued, out-of-print title, this relatively short, often puzzling but largely engaging meditation on love, death and everything in between is certainly worth a look.

The first published long prose work by US poet and memoir writer Richard Katrovas, it appeared briefly in 2001 when published by a small Stateside firm. A chance mention on the blogosphere led to Jon Gifford of Cambridge’s Oleander Press tracking the work down and then republishing it as it appears here, giving it a second chance to impress on this side of the pond at least.

Set in New Orleans, the action flits between middle-aged, white restaurant owner Nathan and gifted black adolescent Willie as each deals with the hard and often puzzling blows that life can so often land. Previously married to Bridget, the mother of his only son, Nathan is now hitched to Lou and stays with her, their two daughters and decrepit dog Poon, whom he loathes. He also harbours a secret in the form of first love Sandra, who has always refused to marry him but with whom he has continued a strange sort of long-term relationship. As if that wasn’t enough, he also has to deal with a gangster who has essentially forced him to provide his mentally disturbed nephew with a job in his restaurant and the looming arrival of his birth mother, whom he has tracked down and begun an e-mail relationship with but whom he has yet to tell any of his family about.

Put like this, it’s the kind of plot that suggests pure farce but, while it is not as though there are no light-hearted moments at all, the general tone is serious and it’s Katrovas’ skill as a writer that ensures all these potentially laughable threads remain entirely credible throughout.

On the other side of the tracks Willie is an academically gifted youth, though with none of the “little adult” traits that might suggest. Indeed his abilities are only really hinted at in the novel’s very earliest stages with offhand references to, among other things, some forthcoming university classes. In just about every other way he’s your typical teen: truculent, full of bravado and struggling to understand the grown-up world around him. As the muse of a dying poet whose last great work shares the name of this novel, he agrees to regular sessions sitting and listening to the piece as it unfolds, though only in exchange for payment. And he also ends each session by telling the poet just what he can do with his magnum opus – in the coarsest terms possible.

The two are utterly unknown to each other and it is only the death of the poet that will bring Nathan and Willie together and provide the life-altering kick that both appear to need.

Grounded in what often feels like the all-too-real world, this is writing that manages to be both earthy and transcendent. In other hands Nathan’s and Willie’s frequent doubts and difficulties – their changeability and mixed motives – could have rendered them too difficult to understand or to properly engage with. As Katrovas presents them, though, both are wonderfully, appealingly human and following both in turn is like getting a privileged look inside the lives of the sort of individuals you could easily imagine brushing up against in real life. The details of both their internal and external lives are perfectly realised and presented and if your heart doesn’t ache just a little for both of them by the book’s close then there is something seriously, seriously wrong with you.

I was going to post another of the recipes today but a bunch of people asked about how I came across the Pig so I'll just put a link to the first entry where all is explained...
Posted by Oleanderman at 10:41 No comments: