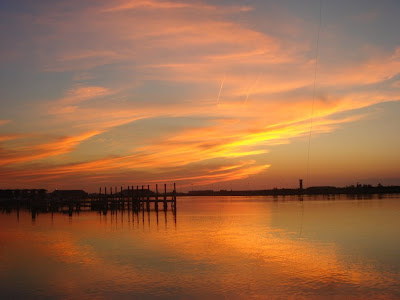 The proofs for the text and, almost more importantly the cover, came in early last week for final checking before the run gets the go-ahead. I have to say the cover looks fantastic - I think it's going to come out very well - and, as it will be uncoated or 'rough,' the texture will feel as it looks - as it were... parchment like, almost. Anyway, we signed off on both and so the modern magic that creates one of the oldest forms of entertainment and inspiration is underway; the results with us in a couple of weeks.

The picture above is of Lake Pontchartrain - the setting for one of the most poignant and crushingly-enlightening scenes as those of you who had advance copies know. I just thought it matched the atmosphere perfectly. Fires of passion dowsed in the deep waters of loss... beautiful.

I'm posting another of the recipes later this week - probably the Big Easy Eggs Benedict that Willie makes for his mum.

The pic's from this site, uploaded by Jeff, and has no copyright notice so I'm borrowing it without permission - get in touch if it's yours and you'd like it taken down.
Posted by Oleanderman at 06:24