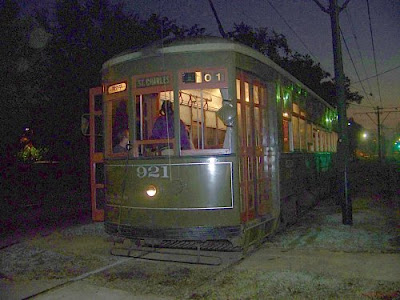 Willie asked what’s the difference, and just as they were making it to the streetcar tracks Bart dropped onto his back and Willie thought oh, shit, there he goes.

From the streetcar, past Lowerline, then Cherokee toward Broadway, Nat glimpsed his best friend, Bart Linsey, who was on his back in the grass of the neutral ground by the tracks. They’d been best friends through elementary, junior high and high school, stayed in close touch through college when Bart went off to UVA but came home every holiday, and about a third of the way into Nat’s first marriage. After that, he’d get in touch every couple of years, and reuniting was always a highlight. He’d not heard from Bart in six years, since Nat, Lou and Marti (and Edie, though no one knew it yet) had had him over for Thanksgiving six years ago. Nat sometimes forgot that hehad a best male friend, but the shock of seeing Bart passed out, filthy – even from a moving vehicle he could see the filth – and emaciated awoke a powerful feeling of fealty.

Even as he ran he realized he’d left his workout bag on the streetcar. He patted his ass to feel his wallet, which he sometimes threw in the bag before leaving the house, and was relieved it was there. As he stood above Bart, with whom he’d had so little contact over the past decade, he caught an ugly whiff of physical degradation, alcohol and piss. His hair and skin were filthy. The stench of his long-lost best friend reached into Nat and coiled around what little of the redfish he’d been able to get down in his agitation at lunch. Bart had likely not bathed in weeks, and there were sores on his lips and forehead. He wore a nice Italian suit, Gucci shoes, and a Rolex.

See a couple of good stories about the return of the streetcar to NOLA here and here. This picture courtesy of YatPundit at www.canalstreetcar.com
Posted by Oleanderman at 06:21